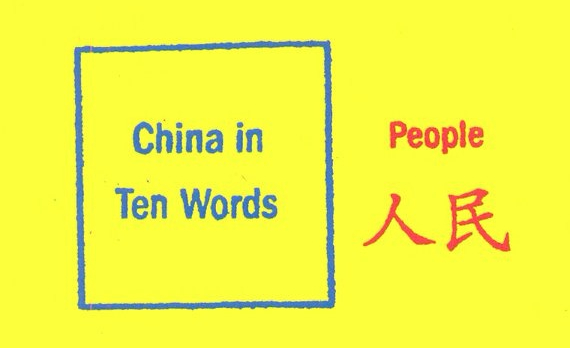 Reading China in 10 Words, a book by Hua Yu and translated by Allan Barr.

In my perpetual quest to understand China more and on a deeper level, I recently picked up the book, China in 10 words. In 10 words/characters, Hua Yu is able to paint an enticing and compelling picture of how China and he himself are able to move through revolution toward its contemporary state. Each word has a corresponding chapter and each chapter is filled with anecdotes from Hua Yu’s past & present, historical and contemporary events, and notes on the social, political and economic landscape of China.
The book is a self-examination of Hua Yu’s youth in China and his later years as he seeks to make sense of what happened in his village and the greater part of China. It is poignant narration and Yu Hua is able to concisely explain how events in his past correlate to grand events under communist rule in China. He doesn’t judge. He simply recounts in a manner which suggests that no other experiences could have been his. Nor would he want, apparently, any other experiences. With a deeper context and his ability to draw on social, cultural and political narratives, you are left in awe at Hua Yu’s ability to keep a solid and neutral perspective in his work. I greatly recommend without reservation for anyone interested in learning more about how traditional China developed into a contemporary and modern China, and those who appreciate strong writing and skill in translation.

“The people are Chairman Mao, and Chairman Mao is the people,” was a saying that Hua Yu came up with in his youth. But when the saying became commonplace, and Hua Yu tried to claim ownership, he was told that “everybody says that.” During the Cultural Revolution, there was only the People, but since China’s rise, new vocabulary to describe the segmenting of the population has arrived. There are netizens, stock traders, fund holders, celebrity fans, laid-off workers, migrant laborers and so on.

There is only one leader in China, and his name is Mao Zedong. In this chapter, Hua Yu seeks to make sense of the importance of Chairman Mao and Tiananmen to his country.

“If literature truly possesses a mysterious power, I think perhaps it is precisely this: that one can read a book by a writer of a different time, country, race, language, culture and there encounter a sensation that is one’s very own.” During the Cultural Revolution, all books were banned and only Mao’s book and Lu Xun’s work were available.

In his youth, Hua Yu did not write a lot as most literature was banned. The one thing which was recurrent in his life were the Cultural Revolution-era big-character posters (dazibao 大字报). In the 1960s, a poster started to circulate Beijing which maintained that the university was counterrevolutionary. The poster came to the attention of Mao Zedong, who had it broadcast
nationally and published in the People’s Daily. 大字报 became a crucial tool in Mao’s struggle during the Cultural Revolution. 大字报 were soon ubiquitous, used for everything from sophisticated debate to satirical entertainment to rabid denunciation; being attacked in a big-character poster was enough to end one’s career. Hua Yu recounts writing 大字报 in his youth at different times.

鲁迅 is one of the earliest and best-known modern Chinese writers.鲁迅 was a favorite writer of Mao Zedong and during his rule, people would either say, “Chairman Mao teaches us…” or “Mr. Lu Xun says…” The words of Lu Xun held a great weight for Chinese people. In his chapter, Yu Hua recounts a story from his youth where he would pick a topic for debate with his friend. The debate would last the whole year and they would go back and forth and try to win surrounding friends to their side. Twice, Hua Yu realized that he could win the debate by pointing out “well, Mr Lu Xun says … and he agrees with me.” As his words held so much weight, his counterpart would be inclined to believe him and the words Mr Lu Xun had spoken. When he was younger, Hua Yu used the words of Mr Lu Xun to win arguments and debates, but he never thought twice about the meaning of the words he spoke. That is until he was much older when he started to re-read his works on his own account. At a later stage in life, Yu Hua realized “at the same time I feel that for a reader to truly encounter an author sometimes depends on finding the right moment.” In his youth, Mr Lu Xun and his words had devolved into a catchphrase for Hua Yu, and it was only later when reading Lu Xun’s work was not mandatory, that Hua Yu was able to enjoy and appreciate his work.

This chapter speaks to the different ways in which China has tried to pursue different forms of revolution and the hidden stories behind the high growth numbers. There was the Great Leap Forward which enticed the people of China to abandon everything and pursue steel production. This caused a devastating blow to the agriculture industry, which had been left abandoned. There has also been a revolution of education and infrastructure. There has been a skyrocketing increase in college admissions (price) without employment guarantee and there have been enormous infrastructure projects which remain underutilized. In China, a culture of Revolution was born during the Cultural Revolution and has persisted to this day; stellar growth with hidden consequences. “What is Revolution?” Hua Yu asks, “Revolution fills life with unknowables, and one’s fate can take an entirely different course overnight; some people soar high in the blink of an eye, and others just as quickly stumble into the deepest pit.”

In today’s China, there are huge social disparities between rich and poor, city and village, differences between religions, income inequalities, income level and allocation, and so on. Unequal lives give rise to unequal dreams. In 2000, CCTV interviewed Chinese children on Children’s Day, asking them what gift they would like to most receive. A boy in Beijing wanted a jet of his own and a girl in Northwest China answered a pair of sneakers. Both dreams seem unreal and like China today; Chinese “live amid huge disparities between recent history and contemporary history, and from one dream to the next”.

Grassroots attempts to give a straightforward answer as to how China was able to propel forward through its economic miracle – people were willing to do the things nobody else was willing to do. Chinese people were inspired to seize every possible opportunity to turn a profit once the reforming socialist economy allowed them to do so. There are those who have been able to make a great profit because they are willing to capitalize on a single – and heavily necessary – item such as paper napkins or cigarette lighters. At the same time, China’s legal system has not developed fast enough and there are plenty of legal loopholes to exploit. However, of the many grassroots millionaires, many have been arrested for crimes of corruption and misappropriation of funds. In China there exists the line – “what goes up comes down even quicker.” Heroes who rise to prominence are there for all to see, and for all to investigate once the tide turns.

To copycat is to have freedom from official control and it has given the word imitation a new meaning. Imitation is the sincerest form of flattery in China. There has been a race to develop look-alike cellphones of European brands and shows to find Mao’s look-alikes. These look-alikes often are able to achieve a celebrity status of their own. The rise of the Copycat is owed to the paradoxes that exist in Chinese society, according to Hua Yu. During the 08 Olympics, Beijing advertised their Games as the most Green to ever exist, even though there were countless accusations of environmental degradation and pollution as an effect of the Games. For example, the passing of the fire produced streets full of car exhaust. In a small Chinese city, a similar copycat fire was being passed around, producing no environmental degradation. The copycat has gained acceptance, and has sometimes even been more beneficial or useful than the original. Hua Yu tries to conceptualize the copycat phenomenon as a form of revolutionary action initiated by the weak against the strong, similar to the Revolution which happened in China over 40 years ago during the Cultural Revolution. To copycat is then to merely rise up against the oppressors.

To bamboozle someone, has become a staple in China, a part of its cultural lexicon. Did you make someone show up to an event of yours, you have successfully bamboozled them. Did you ask your cousin to do something for you, you have successfully bamboozled her. It is to play a con trick and to rip somebody off – but its definition has grown wider. The rapid rise of using words such as bamboozle, or even copycat, show that Chinese now live in a society where there is a “breakdown of social morality and a confusion in the value system in China today; it is an aftereffect of our uneven development these past thirty years.” Hua Yu indicates that in a society where everyone is trying to bamboozle, they end up bamboozling themselves and he recounts a ‘scarring’ event from his youth. He would so often pretend to be sick with either a fever or a stomach ache that at one point, his doctor father took him to the operating table, to perform an appendectomy.