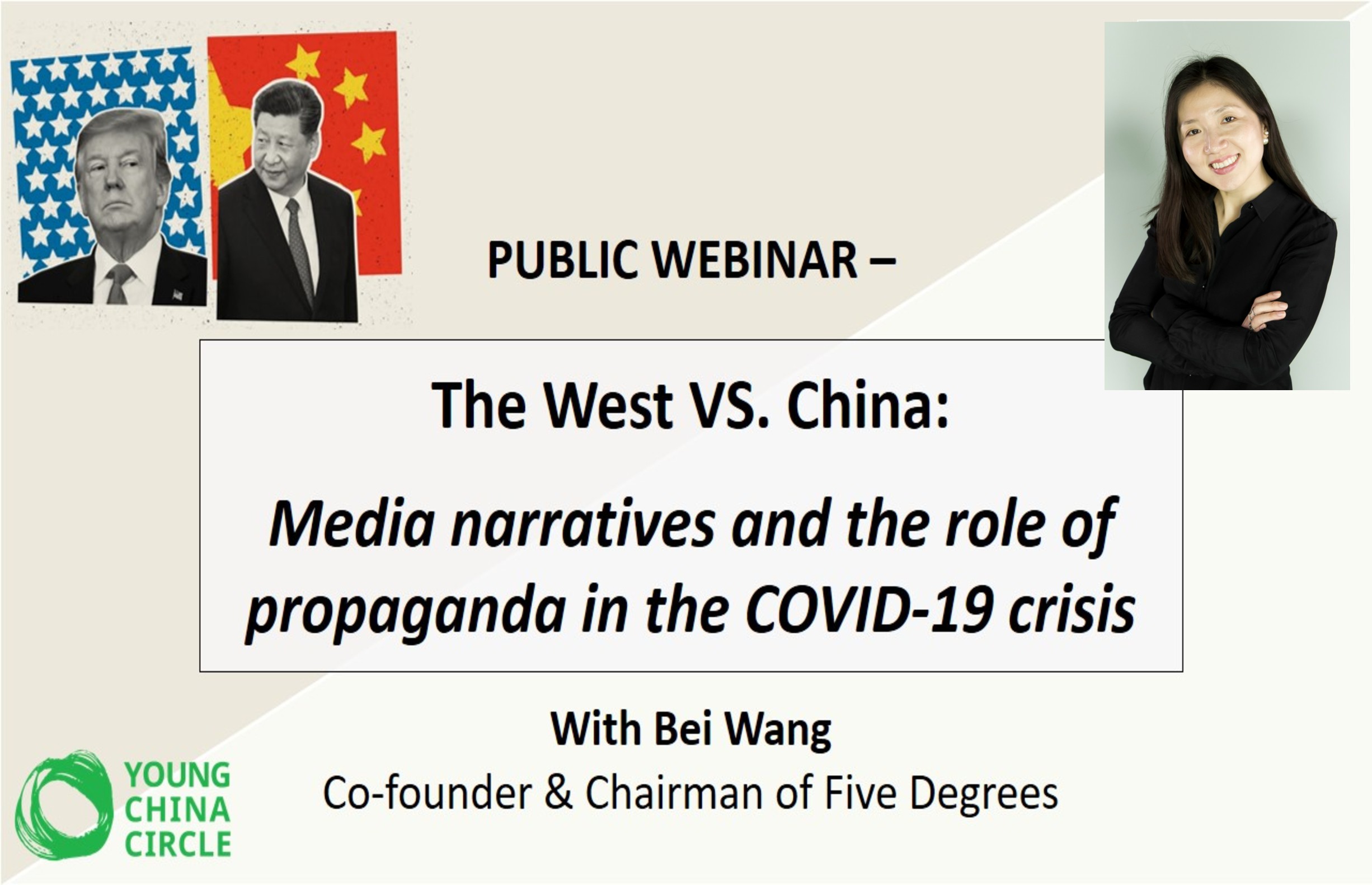 The West vs China: Media narratives and the role of propaganda in the COVID-19 crisis

On June 25th, Young China Circle hosted its first ever webinar. For the inaugural webinar, YCC invited Bei Wang. As a self-proclaimed activist at heart, Bei Wang currently is the co-founder and Chairman of Five Degrees. Five Degrees is an organisation that aims to connect the EU/Europe and the US with China. For almost two decades, Five Degrees has helped Western organisations and companies tell their stories, promote their brands and sell their products and services to the Chinese. Before starting her own company, Bei worked in Dutch media for more than 10 years.

Since the start of globalization, technology has sped up and media has become a rapid-fire of mass (dis)information. There are many advantages to globalization, we are able to communicate more effectively and efficiently with people all over the world and social media allows us to stay in touch with different cultures. International media can make us more aware of what is happening on the other side of the world. But the spread of mass media all over the world has not been without its challenges. Globalization is expensive and it is highlighting the gap between the haves and the have-nots. Most terrifyingly, countries under authoritarian rule have seen an increase in the restriction of freedom of press. This happens increasingly as “liberal” or “western” media can propagate their own ideas and views. The 24-hour cycle of media has made us incapacitated in the amount of information we are able to consume and process.

In effect, as someone who is trilingual, Bei derives her own form of sport; setting up games to see how different media portray similar events. In her webinar, Bei challenges us to do the same.

Take a look at these headlines and try to derive its source;

When looking at these four headlines, Bei tells us that it is important to keep in mind 5 lenses. Much like her organisation Five Degrees, Bei jokes that she likes to count in 5s. Who owns the newspaper in which a publication has appeared, what is its ownership? Is it a Chinese state-owned newspaper company or is it owned by an American conglomerate. Next, it is important to consider sources. Who is quoted in the article? Do those quoted have degrees in their respective fields?

Third, take a look at perspectives. Does the author consider both sides of a dilemma? Fourth, what does that author use as their narrative. Is it an op-ed or a commentary, or does the article merely state facts. A last consideration is nuance. This consideration can be the most difficult - what does the author try to imply in her/his article? Is she/he trying to make a point? Is their point overt and transparent, or is it implicit?

Bei ends her webinar with an interesting think piece - and some homework. Recently, on the 22nd of June, the EU-China summit took place via video conference. Using the tools Bei has provided us with (5 lenses to analyse media), we can now come up with our own views. Much like a diet, Bei suggests we can become more mindful of what we consume.

YCC would like to thank Bei for her interesting input, and we hope to see you at our next seminar/webinar!